Prime Minister Naftali Bennett published an open letter to the Israeli public on Friday calling for support for the coalition reeling on its feet for political stability and a properly functioning government.

The unusual message, sent on the government’s first anniversary, comes as it has been moving from one crisis to the next since it lost a parliamentary majority in early April, and appears to be slowly heading toward collapse.

The letter indicated Bennett’s fears of collapse, as the specter of more elections and a further challenge to opposition leader Benjamin Netanyahu looms.

Bennett portrayed his coalition as bringing political stability to Israel when it took office last June after an unprecedented series of inconclusive elections. The Prime Minister appealed to the public to help maintain this stability and denounced Israel’s vitriolic policies and opposition attacks.

“About a year ago, the State of Israel went through one of the most difficult moments I have ever known,” Bennett wrote.

He said, referring to riots that erupted in Arab-Jewish cities during last year’s war with Palestinian factions in Gaza, “an endless electoral chaos, government paralysis, the cities of Lod and Acre burning in the face of a humiliating and conflicting government.”

He said that Israel showed “terrible weakness in the face of a murderous enemy who fired rockets at Jerusalem”, and was caught in the “worship of one man and enslaving the energy of the state for his legal needs”, referring to opposition leader and then Prime Minister Benjamin Netanyahu, and his trial on corruption charges. 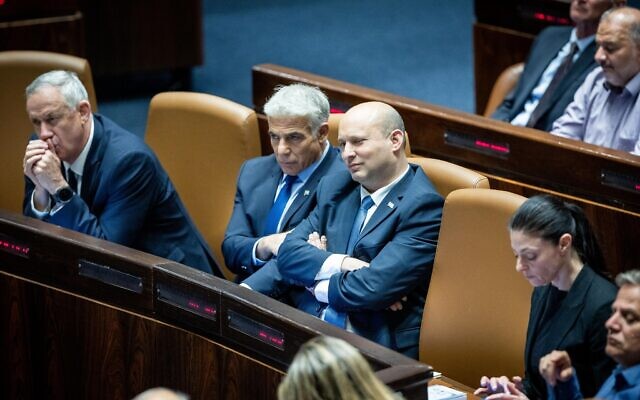 Bennett said he put his coalition together last year — from a disparate mix of right-wing, centrist and left-wing parties as well as the Islamist Raam faction — to save the country, despite coming under fire from others on the right. .

“We stood a few days away from a fifth election cycle that would have separated the country from each other, and then I made one of the hardest and most Zionist decisions of my life: to form a government to save Israel from chaos and make it work again. To connect with people with different opinions than mine to save the country.”

Bennett said he knew at the time that a powerful “poison machine” would turn against him, but he partnered with various parties in order to “defend the State of Israel.”

Netanyahu and the opposition he leads have been criticizing the Bennett government for its work with Raim’s group, claiming that the Islamist party supports terrorism – even though Netanyahu himself had sought an alliance with Raim’s own party before the current government was formed.

“Together with my colleagues in government, we have brought Israel back to jobs and growth,” Bennett said, adding that Israel was now again at a “historic crossroads.” 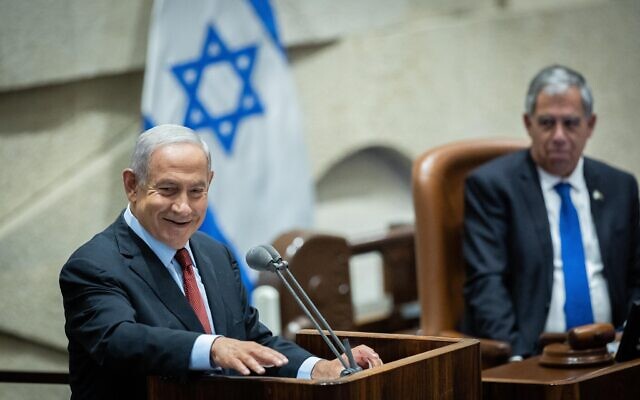 Opposition leader and Likud party chairman Benjamin Netanyahu at the opening of the Knesset’s summer session in Jerusalem, May 9, 2022 (Yonatan Sindel/Flash90)

“To move forward with a functioning state, or slip back into chaos, internal hatred, external weakness, and enslave the state to the needs of one man,” Bennett said, referring again to Netanyahu.

Bennett lamented that “there is only one side taking the field – the loud and deadly poison machine” of opposition lawmakers such as Netanyahu, Itamar Ben Gvir, Ayman Odeh and Bezalel Smotrich. They fan violence, blackmail and ‘fake news’, while the silent majority is happy with a calm and efficient government.

If we don’t want to back off, we must all take action. “This letter is a call to action,” Bennett said.

In response to the prime minister’s letter, Netanyahu’s Likud party said: “Bennett’s lies cannot cover the fact that he ceded control of the state to [Ra’am’s] Mansour Abbas [the opposition Joint List’s] Ahmed Tibi and their friends who support terrorism.

The party pledged to “do everything in its power to bring down this weak and failed government.”

“Even a lie that you repeat thousands of times on dozens of pages does not become true,” said MK Bezalel Smotrich of religious Zionism.

He also alleged that Bennett prevented the formation of a right-wing government by seeking to cooperate with “radical leftists and supporters of anti-Zionist terrorism to be prime minister at any cost” after last year’s elections.

While Bennett’s Yamina party said at the time that it was open to joining a government led by Netanyahu, Smotrich’s refusal to cooperate with the Aid List denies the former prime minister a majority.

“Bennett cheated, cheated and lied all the time and continued to do so in this letter,” Smotrich said.

Alongside the letter, the prime minister posted a video showing opposition MPs launching stinging attacks against the government, squabbling with police, right-wing activists burning pictures of coalition leaders and calling leftists “traitors” who deserve the death penalty, and news reports of death threats.

He also released a digital pamphlet bearing his name directed at the “Silent Zionist Majority,” likening the State of Israel to the ancient kingdoms of Israel destroyed amid internal conflict.

The booklet He called for the establishment of the government and its continued existence, highlighting its achievements, including the approval of the budget and economic growth.

The brochure ended with a call to the audience to “not leave us alone in the arena. Make your voice heard.

He wrote: “Spread our message – that decent people, who have different opinions, and who love the country can sit together and work for the good of the country.” He said government supporters should share the message, organize protests, make calls, and volunteer.

“We don’t have another country, so we will never give up,” he said.

Bennett’s coalition lost its parliamentary majority when Edith Silman, a member of his Yamina party, withdrew from the government in early April. Since then, the alliance has been on the verge of collapse, with its latest crisis this week revolving around its ongoing struggle to muster enough support to pass key legislation to renew the extension of Israeli law to Israelis living in the West Bank.

An opinion poll last week showed Netanyahu’s opposition leading with voters and close to achieving a majority in the Knesset.

The Channel 12 poll found Netanyahu’s bloc would win 59 seats if elections were held today, putting it close to a majority in the 120-seat Knesset, but indicating further political stalemate if the government collapses. Israel has gone through four tough elections since 2019 as opposing blocs struggle to form a solid majority in the Knesset.

The poll also found that most Israelis believe that the current government will collapse within six months and that more Israelis support Netanyahu for prime minister than any other candidate.