“Had I not been discriminated against or persecuted, I would never have received a Nobel,” wrote pioneering neuroscientist Rita Levi-Montalcini, who shared the 1986 Nobel Prize in Physiology or Medicine with biochemist Stanley Cohen, Ph.D. .

In 1952, Levi-Montalcini discovered nerve growth factor (NGF), a protein that causes the growth of developing cells by stimulating surrounding nerve tissue. In related research, Cohen discovered epidermal growth factor, which stimulates the proliferation of epithelial cells. Both scientists conducted their research while they were faculty members at Washington University, St. Louis. Levi-Montalcini’s findings have led to major advances in the understanding of cell and organ development, as well as many serious conditions including tumors, developmental abnormalities, cancers, Parkinson’s disease and Alzheimer’s disease. 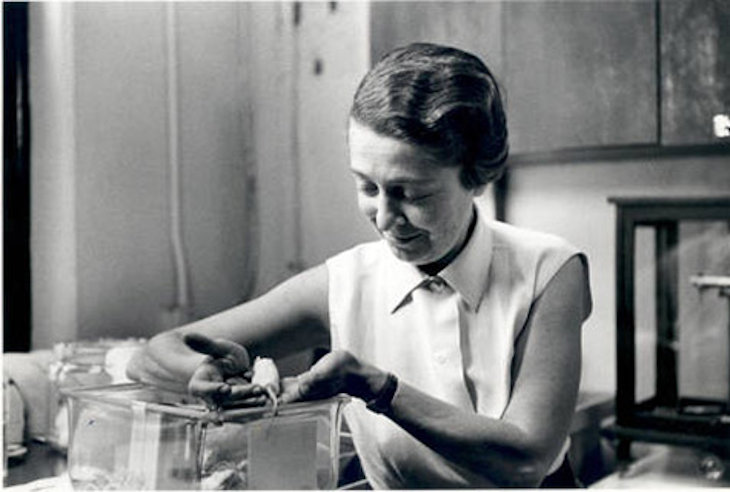 Levi-Montalcini in her lab in the early 1960s. (credit: Baker Medical Library)

Born on April 22, 1909 in Turin, Italy, Levi Montalcini first dreamed of becoming a writer. In her 1988 memoir, In Praise of Imperfection, she wrote lovingly of her family life, which included two sisters and one brother: “The four of us enjoyed a wonderful family atmosphere full of love and mutual devotion. Both parents were highly educated and instilled in us a high appreciation for intellectual pursuit. However, It was a typical Victorian way of life, where all decisions were made by the head of the household, husband and father.”

Rita began to forge her path with the perseverance and focus that has characterized her entire life.

The head of the family, Adamo Levy, only allowed his son, Gino, to attend university, despite the exceptional intelligence of all his sons. Gino became an accomplished sculptor and architect, and Rita’s twin sister, Paula, was allowed to develop a career as an artist, becoming a famous painter. But Adamu feared his careers would interfere with his daughters’ roles as wives and mothers.

Rita began to forge her path with the perseverance and focus that has characterized her entire life. “At twenty years of age, I realized that I could not adapt to a female role as envisioned by my father and asked him for permission to engage in a professional career,” she said during her speech while accepting the Nobel Prize. I was deeply saddened by the death of the family’s longtime nanny, Giovanna, and was determined to become a doctor and heal the sick. After hearing about his daughter, Adamu could no longer stand in her way. Within eight months, she completed the academic gaps in Latin, Greek, and mathematics, and graduated from high school. She entered medical school in Turin in 1930, and was one of only seven women in the school, including her cousin Eugenia. 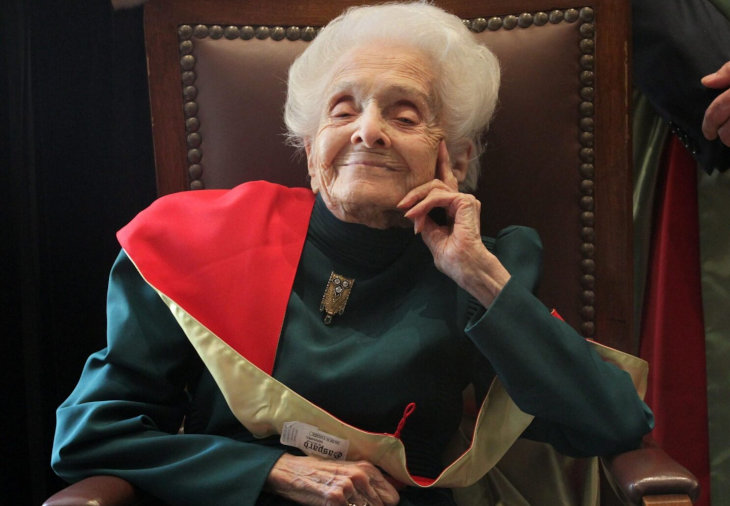 Receiving the Nobel Prize in Physiology or Medicine

She later wrote: “It was an important period of my life, although very demanding.” “I was so happy because I felt I had found the right direction in life.” She was studied by the famous Italian histologist Giuseppe Levi, who taught a rigorous and unique approach to biological sciences. After graduating from medical school Excellent with honors Levi-Montalcini, who received a degree in medicine and surgery in 1936, started a program specializing in neuroscience and psychiatry. But that same year, Mussolini issued his “Race Manifesto,” the first of a raft of anti-Semitic and racist laws that by 1938 stripped Italian Jews of their citizenship as well as any government, professional, or university positions.

I would like to thank Mussolini for declaring that I am of an inferior race. This led me to the joy of working…in a bedroom.

Levi-Montalcini did not retreat from her mission, accepted an invitation to conduct research at the Institute of Neurological Diseases in Brussels, but this role was short-lived. As soon as word spread about the planned German invasion of Belgium, she returned to her family in Turin. Levi-Montalcinis chose to “pursue some activities which need neither support nor connection to the outside Aryan world in which we live” rather than emigrating. 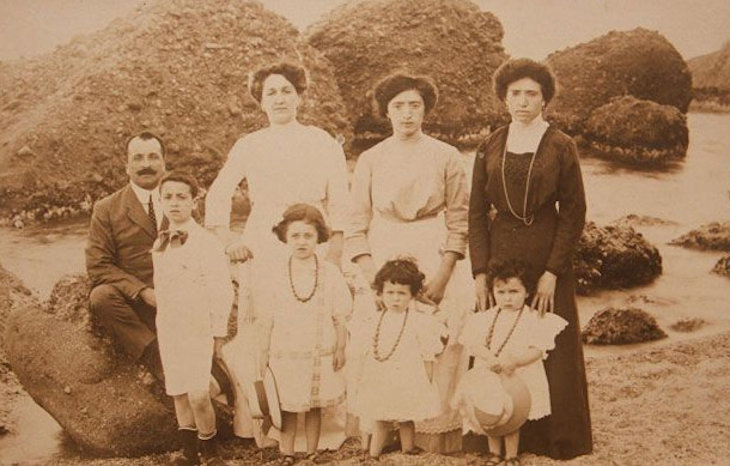 The Levi-Montalcini family. Rita’s father, Adamo Levy, is far left. In the front row are the children, Gino, Anna, Paula and Rita. At the far right is Rita’s mother, Adele Montalcini.

Rita Levi-Montalcini built a small research unit in her bedroom to study chick embryos, inspired by early work by doctor Victor Hamburger, who was studying how wings in chicken embryos promote embryonic growth and the development of the nerves that control them. During this time, Italian journals were not publishing the work of Jewish scholars, so Levi-Montalcini published their results abroad or through the Vatican. She later wrote, “I must thank Mussolini for declaring I am of an inferior race. This led me to the pleasure of working, not anymore, unfortunately, in college institutes but in the bedroom.”

When the Germans invaded Italy in the fall of 1943, the Levi-Montalcini family fled to Florence, where they lived underground until the end of the war. Rita Levi-Montalcini was working with the Red Cross in Florence, treating critically ill and wounded war refugees. A typhus epidemic hit the refugee camp, killing up to fifty patients a day. The experience was so emotionally stressful that she decided to focus the rest of her career on research rather than clinical medicine.

After the war, she was returned to her position at the university, but Dr. Hamburger, who was impressed by Levi Montalcini’s published work related to his work, invited her to work with him at the University of Washington. This invitation changed the course of her life. The research collaboration planned for one year proved so fruitful that it remained for 30 years, although from 1962 onwards she divided her time between St. Rome.

In 2001, her pioneering work led to her being appointed to the Italian Senate for life by the President of the Italian Republic, Carlo Azeglio Ciampi, a prestigious position awarded “for outstanding national merits in the social, scientific, artistic or literary field”.

“One percent, I have a better mind – thanks to experience – than when I was 20 years old.”

Levi Montalcini has never felt attracted to motherhood or home life and has never been married. In a 2006 interview she said, “My life has been enriched by excellent human relationships, work and interests. I have never felt lonely.” Together with her twin sister Paula, she also created the Rita Levi-Montalcini Onlus Foundation, which funds educational scholarships for women in Africa. Active almost to the end of her long life, she continued to write and give public lectures. At the age of ninety-nine, she stood on stage for about an hour, talking to a group of about 1,000 students, showing no signs of fatigue. “There was something magnetic about her, someone so captivating that you can’t help but listen to her every word,” said one listener. 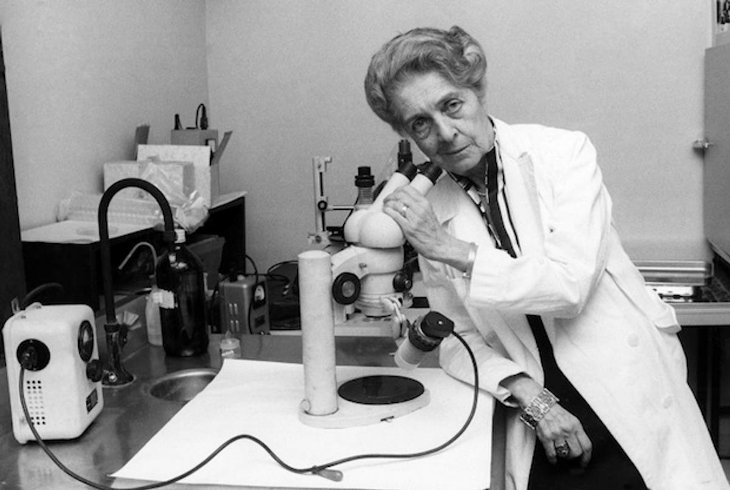 In addition to the Nobel Prize, Levi-Montalcini has received honors and awards for her pioneering research in the field of neuroscience. In 1963, she was the first scientist to receive the Max Weinstein Prize, awarded by the United Cerebral Palsy Society for outstanding contributions to neurological disease research. In 1975 she became the first woman to be appointed to the Pontifical Scientific Academy, receiving the National Medal of Science in 1987.

Having defied stereotypes about what a woman can achieve, and defying Nazi and fascist attempts to cut her off from her job, Rita Levi-Montalcini remained an unstoppable force to be reckoned with, a woman with “a hurricane of ideas and an impetus for knowledge,” said Pietro Grasso, former president of the Italian Senate, More and moving forward.”

Levi Montalcini wrote in her memoirs: “Life does not end with death. What you pass on to others remains. It is not immortality a body that will one day die. It does not matter . . . of importance is the message you leave to others. This is immortality.”

Like what you read? Give Jews around the world a chance to experience engaging Jewish wisdom with more articles and videos about Aish. It will make your mother very proud and as a non-profit organization, it is your support that keeps us going. Thank you so much!